The client called on ONA expertise in the mooring field to support considerations for their new rescue capability, the former NSW Police 16m patrol vessel “Fearless” to be situated at the island to support sea rescue endeavors in the Pacific Ocean. The lagoon as it offers significant protection to the sea from breaking waves associated with storm and cyclonic events.

“Lord Howe Island and its surrounding waters support the world’s southern-most tropical coral reef and the only fringing coral reef lagoon in NSW. The waters are home to many endemic and threatened species. The area was declared a World Heritage site in 1982, with marine parks established in NSW state waters in 1999 and Commonwealth waters in 2000. The Lord Howe Island Marine Park covers NSW waters. It is the only world heritage listed marine park in NSW. The Lord Howe Marine Park covers Commonwealth waters.” (See Guide)

The island moorings are managed by the Lord Howe Island Board and mooring capacity details can be found on-line for Visiting Vessels. The island is currently serviced by a series of moorings secured with Danforth anchors in the shallows of the lagoon. As with most anchors in a coral environment, the anchors tend to become cemented into the coral formations and inspection can be challenging. 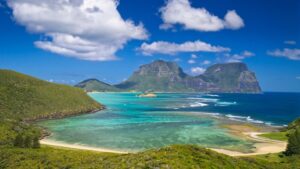 ONA are proud to have supported NSW Sea Rescue in implementing such an important service to the Lord Howe Island community and for the safety of seafarers in the Pacific. The work compliments our mooring work on the Great Barrier Reef supporting and implementing the evolution of environmentally friendly mooring systems in sensitive marine habitats.