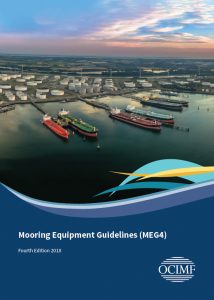 The Marine Equipment Guidelines (MEG4) by OCIMF now includes revised terms and definitions which are pertinent to the way the guidelines are interpreted. These terms are quoted as presented on the OCIMF website (www.ocimf.org) and are shown below:

Ship Design Minimum Breaking Load – “The minimum breaking load of new, dry mooring lines for which a ship’s mooring system is designed, to meet OCIMF standard environmental criteria restraint requirements. The ship design MBL is the core parameter against which all the other components of a ship’s mooring system are sized and designed with defined tolerances.

Nylon (polyamide) mooring lines should be specified as break tested wet because nylon lines change strength characteristics once exposed to water and generally do not fully dry to their original construction state.”

Line Design Break Force (LDBF) – “LDBF is the minimum force that a new, dry, spliced mooring line will break at when tested according to appendix B. This is for all mooring line and tail materials except those manufactured from nylon which is tested wet and spliced. This value is declared by the manufacturer on each line’s mooring line certificate (see appendix B) and is stated on a manufacturer’s line data sheet. As outlined in appendix B, when selecting lines, the LDBF of a line shall be 100%–105% of the ship design MBL.

The LDBF for nylon (polyamide) mooring lines should be specified as break tested wet because nylon lines change strength characteristics once exposed to water and generally do not fully dry to their original construction state.”

Working Load Limit (WLL) – The maximum load that a mooring line should be subjected to in operational service, calculated from the standard environmental criteria. The WLL is expressed as a percentage of ship design MBL and should be used as a limiting value in both ship design and operational mooring analyses. During operation, the WLL should not be exceeded.

In addition OCIMF have also addressed the mostly ambiguous side of mooring line management in line with safety initiatives by IMO of mooring lines and equipment. A revised SOLAS regulation on safe mooring was expected to be finalised January 2018 this year by the IMO Sub-Committee on Ship Design and Construction (SDC) meeting this week, aiming to prevent accidents and injury when ships are secured at their berth in a port.

Line Management Plan (LMP) – LMP is used to manage the operation and retirement of mooring lines and tails. The LMP also documents the requirements, assumptions and evaluation methods used in determining the line retirement criteria. The LMP is specific to an operator, ship type, and trade route; however, MEG4 gives general guidance on establishing a LMP.

Mooring System Management Plan (MSMP) – The MSMP which will complement the ship’s safety management system. Through a ‘goal-based’ approach core elements of the mooring system are identified, against which high level ‘goals’ are established supported by more detailed ‘functional requirements’. A register of the mooring system components is maintained for the ship’s life in an accompanying Mooring System Management Plan Register (MSMPR).

At ONA marine we welcome clarification of these terms in the new MEG4 guidelines however recognise they will take some time to permeate the industry. In our experience definitions have become a little problematic when some equipment requires being installed and lifted to different standards and interpretation thereof.

ONA is able to offer and support setup of management plans either using client databases or through provision of OMA Marine databases. For more information call ONA Marine.