Last week marks the 10-year anniversary of the foundering of the ship MV Tycoon, after failure of its mooring system, at Flying Fish Cove, Christmas Island. The incident highlights the need to not only inspect but also to manage mooring system integrity. ATSB findings include “Furthermore, the managers of the port had not implemented an effective inspection and maintenance program and therefore were not aware of the deteriorated condition of the aft mooring line shackle.”

The Australian Transport and Safety Bureau (ATSB) inspected and reported and described the incident as follows:
On the morning of 8 January 2012, one of the permanent mooring lines holding the general cargo ship Tycoon in position in the inner moorings at Flying Fish Cove, Christmas Island, came free from its anchor. As a result, the ship moved forward and closer to the nearby terminal rock face, eventually making contact with the rock face as the weather and sea conditions deteriorated.
Despite attempts to move it away, Tycoon continued to pound against the rock face. Eventually, the ship’s engine room began to flood through a tear in the hull. Shortly afterwards, the crew safely abandoned the ship. At about 1100 on 9 January, Tycoon suffered a catastrophic failure of its hull and the contents of the ship’s number two cargo hold, about 260 tonnes of bagged phosphate, were exposed to the sea. The ship continued to be pounded by the sea and swell and, over the following months, it broke up under the action of the waves. On 14 May, salvors were appointed and by 26 July the wreck had been removed from Flying Fish Cove.

In short, the ATSB found the following:
The ATSB found that the shackle connecting the port’s cantilever mooring line to its anchor chain failed and that Tycoon’s master did not advise shore authorities of his concern regarding the deteriorating conditions or that the cantilever mooring line had come free. He also did not make proper use of the ship’s main engine or mooring lines to attempt to keep the ship in position after the mooring line came free. In addition, it was found that there had been no risk assessment undertaken by successive port managers with regard to the use of the inner moorings and that there was little guidance provided to the masters of ships intending to moor in Flying Fish Cove. Furthermore, the managers of the port had not implemented an effective inspection and maintenance program and therefore were not aware of the deteriorated condition of the aft mooring line shackle.

Footage of the rescue can be found here: 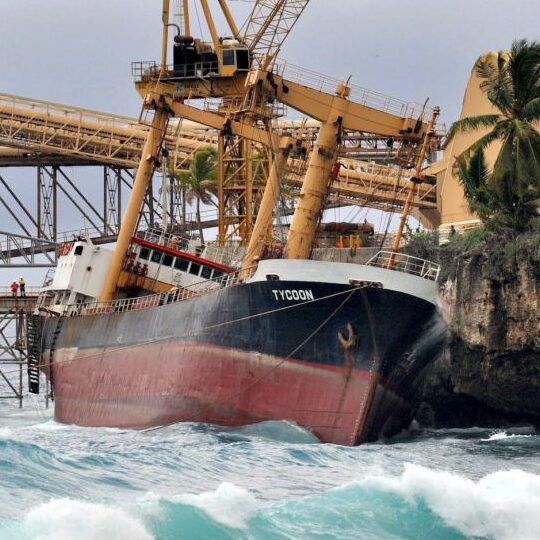 Ask a question or get in touch to arrange a quotation.